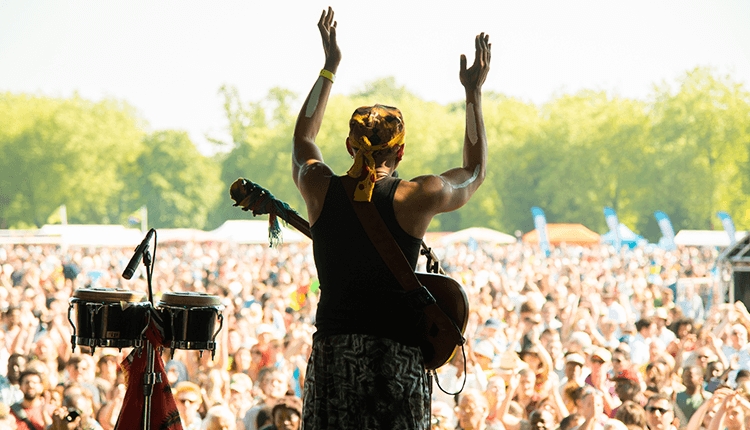 A Blog from Kevin McManus, Head of Liverpool UNESCO City of Music, about World Music Day in the city of Liverpool.

World Music Day (or Fête de la musique) is celebrated every year on 21st June.  If you haven’t heard of it before, it is the simple but brilliant concept of having a day that is all about celebrating music in all its forms and the importance of music in people’s lives.

To my mind if there was ever a city that truly understands the importance of music and the sheer joy it can bring you then it is Liverpool. To give you just one example of this, while I’ve been writing this piece a busker just outside the office window has been playing some classic Beatles songs. No doubt the same thing happens in every other town and city but because this is Liverpool the busker has attracted a huge audience who quickly began to join in on every song, turning what was merely an ad-hoc performance into a moving communal experience enjoyed by everyone.

For me this symbolises how music is writ large through everyday Liverpool life, showcasing the characteristics that make Liverpool a unique and special place. We are a port city and a place that loves a story, a melody, a song and which takes advantage of any opportunity to party, to dance, sing, laugh or cry. Every day is a music day and every night is a party night in Liverpool.

Whenever you come to Liverpool there is always something exciting happening. Just look at this weekend which featured the amazing Africa Oyé, bringing joy to thousands of happy people of all ages in beautiful Sefton Park. It was a joy just walking around the festival site seeing everyone enjoying the great music and lovely atmosphere (although if I’m allowed a moan the Festival Gods could have given us a bit of Saturday sun to make the day even more perfect).

On the Friday night you would have found me shaking an ungainly leg at the much less well known but excellent Bootle Festival; a real grassroots festival that is firmly rooted in and loved by its local community.

The weekend also saw the city flooded with Bowie fans from all over the world for the Bowie Convention, climaxing in the extravagant madness of the Bowie Ball in the grand surroundings of St Georges Hall. I know Bowie has little in the way of direct Liverpool connections but the fact that the event was held here is testament to the magical musical pull of the city and the ambition of Sound City to make it happen here.

And then, just to top it all off, there was a whole load of activity paying tribute to and celebrating the 80th birthday of one of our most famous sons, the legend that is Sir Paul McCartney. I loved the fact that Mathew Street was renamed McCartney Street for the weekend, and other favourites included Amber Jay singing McCartney songs on the 80 bus on the same route Sir Paul would have journeyed on all those years ago. And if you haven’t seen the video you should check out the kids from Stockton Heath primary school (McCartney’s first school) singing Happy Birthday to Paul on Penny Lane. It’s a lovely watch.

It is difficult to explain, but music is just what we do and it pervades every aspect of our life.  I’d argue that football and music are more entwined here than anywhere else in the world. Just look at when Liverpool reached the Champions League Final in Paris last month and our music was at the very heart of the entertainment during the day for the thousands of LFC fans there. Over 50,000 fans where there in the Fan Zone in glorious atmosphere, soaking up music from an incredible array of local talent. It really is impossible to have a big Liverpool occasion, even if it’s not in the city itself, without our music. The fans have always known about the close relationship between those two central pillars of Liverpool life – football and music – and I think that LFC have now realised and seen the value of this link too.

I started by mentioning what an extraordinary weekend of music we have just had but the reality is that every week there is something exciting happening with music in the city. Our music reflects the city’s diversity, strength and passion and is always there in some form or another. You can see it most obviously in the amazing array of talent that we continue to produce across every musical genre, and we are so lucky that we have passionate people running a wide variety of amazing venues that allow our talented musicians to flourish.

The range of our music festivals must make us the envy of every other UK city.  I’ve already mentioned Africa Oyé in this piece but we shouldn’t underplay the significance of a festival that is celebrating its 30th anniversary this year and which remains the UK’s largest free festival celebrating African music and culture. We are lucky to have it and we should celebrate the fact that it takes place here along with many others including LIMF (which returns in July), Sound City, Carnival, Milapfest, the Irish Festival, and the Liverpool Arab Arts Festival to name just a few.

World Music Day is partly about celebrating the importance of music in people’s lives and in Liverpool we have a proud tradition of people getting involved in music just for the fun of it and for the benefits it brings to them. I love the work of Positive Impact and In Harmony projects, but they’re just two examples of the work that goes on every week of the year ensuring that people from every community across the city region have the opportunity to access music and experience the joy it brings.

Liverpool without music would be a much duller place. We don’t need a particular day to celebrate as a music day. Every day is a music day here and we should really celebrate that.